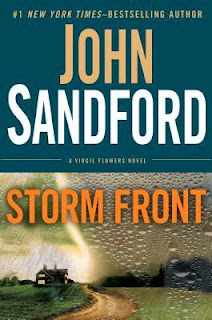 3 out of 5 stars made of counterfeit lumber.

Minnesota state investigator Virgil Flowers is working diligently on a case involving Florence ‘Ma’ Nobles and her sons selling counterfeit antique lumber. Of course, part of the reason that Virgil is working so hard is that Ma is very attractive and flirting shamelessly with him. So when a call comes in from his boss Lucas Davenport with another assignment, Virgil is more than a little miffed.

It’s no big deal, Davenport tells him. A Lutheran minister named Elijah Jones who is dying of cancer stole an ancient inscribed stone called a stele from an archaeological dig in Israel and smuggled it home to Minnesota. The Israelis want it back and have dispatched an antiquities expert to makes sure that happens. Virgil just has to play tour guide, pick up the terminally ill minister and locate the stele. Davenport assures Flowers that he’ll back on his counterfeit lumber case in to time at all.

Virgil really should know by now that Davenport lies…

Jones plans to auction the stele off to the highest bidder to get the money needed to care for his wife suffering from Alzheimer’s after he dies, and it turns out the old man is pretty wily. The stele’s inscription has historic implications that could be very damaging to Israel so Hezbollah has sent a representative to try and obtain it for propaganda purposes. A couple of tough Turks with fearsome reputations also show up. Two spotlight hungry media whores who pretend to be scholars also want in on the action, and the Israelis have a couple of dirty tricks at the ready. Even Ma Nobles gets mixed up in hunt for the stele, much to Virgil’s consternation.

Soon there’s more allegiances declared and alliances broken than on a season of Survivor, and an increasingly frustrated Virgil can’t seem to make any of these double crossing idiots understand that someone’s gonna get killed if this foolishness doesn’t stop.

Sandford has a lot of interests other than writing and one of the them is archaeology. Per his bio on his web page, he has funded and participated in a large dig in Israel since the late ‘90s so it’s a little surprising that this is the first one of his books to feature an archaeological angle to it. Despite the international flavor with various groups and countries interested in the stele, this still has the same grounded style that you usually get in a Sandford novel. There are some great bits late in the book with Virgil interacting with the shadowy figures of some unnamed American security agency, but Flowers remains the kind of guy far more interested in reading a fishing magazine than worrying about international intrigue and national security.

There’s an almost playful attitude in this one, and while the story is treated seriously, it wouldn’t have taken much to turn this into an outright farce, kind of like one of Donald Westlake’s Dortmunder novels. Sandford’s always had a sense of humor, but this is the first one of his books where he almost seems to make light of the stakes involved. There also isn’t much of the usual momentum and tension you get in a Lucas Davenport or Virgil Flowers novel. This isn’t a bad thing since it seems like a bit of departure from the others and with this many books in play, I like that Sandford doesn’t feel obligated to stick to the formula that has worked so well for him in the past.

It isn’t my favorite Sandford novel but it’s a fun one.
Posted by Kemper at 11:28 AM