Somebody Put That Bartender Out! 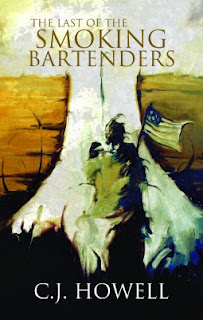 Last of the Smoking Bartenders
by C.J. Howell

3 out 5 stars with magnetic strips for tracking purposes

(I received a free copy of this book from NetGalley in exchange for this review.)

A murderous drifter roams the desert of the American southwest while setting fire to things like electrical substation.  No, wait.  Actually, the drifter is an undercover agent trying to thwart the plans of the evil organization called the Network who plans to blow up Hoover Dam.  Which story is true? Read the book and decide for yourself.
Tom is convinced that the Network is real and has lived off the grid for years so he appears to be nothing more than another homeless person to most people.  He thinks that the Network is omnipresent and could track him if he made a phone call or handled paper money because of the magnetic strips embedded in the bills so he will only use change.
When Tom meets a small town drunk named Lorne, the two go on a binge during which Tom convinces Lorne that the Network is real when he attacks a couple of their operations he runs across.  Later, Lorne tells Tom’s story to some meth dealing Native Americans on a reservation and they join Lorne for a meth fuelled rampage against the Network.  Or maybe they’re just on a crime spree.  It gets a little confusing.  Maybe the meth and beer have something to do with that.
Meanwhile, Hailey Garrett runs a one-woman FBI office from her house in a remote part of Utah.  Hailey was injured in the line of duty and along with the plastic hip, she got the perk of running her show out in the boonies and picking the cases she wants to investigate.  While Hailey looks into a bit of Tom’s anti-Network destruction, she finds enough evidence to put her on his trail.
This well written book starts out seeming like it could be a James Crumley style tale of a couple of odd characters on a booze-n-drug fueled road trip, but there’s an intriguing shift about halfway through in which the violence that Tom has inadvertently kicked off contrasts with a quieter exploration of the nature of paranoia.  There’s a long section in which Tom struggles to merely get across a large city in the brutal Southwestern heat.  When you’re a smelly homeless guy who has only a bag full of change and couple of cans of food, crossing the suburbs, industrial zones and inner city becomes an ordeal that could literally kill you.  As Tom struggles, he starts to reflect on his past and question whether his mission is real or a delusion.   If it is real, why must he suffer so to do the right thing?  If he’s crazy, why can’t he just stop the madness and find some peace?
There’s a real dilemma for the reader in how much they want to relate with Tom.  If you think that he's insane, then he’s a decent person who lives a miserable life because of the demons in his head, yet then he’s also a danger to others since he’s more than willing to inflict violence on any he sees as Network operatives.  This makes him both terrifying and pitiable at the same time.
The one bit that rang false was the character of Hailey.  It seems unlikely that the FBI would sanction a handicapped agent working solo on whatever cases she gets interested in.  This may or may not be a spoiler so skip the rest of this paragraph is you want to be completely in the dark.  But I wondered if we were supposed to view Hailey like Tom in that she seemed like a person who may not be dealing in reality.  Yet, she interacts with other people throughout the book as an FBI agent so it seems like that’s exactly what she is.  I think.
It’s an offbeat book with eccentric characters and a full measure of ultra-violence, but there’s also a thoughtful account of a person who is living in the cracks of society as he tries to decide whether he can trust himself.
Also posted at Goodreads.
Posted by Kemper at 4:48 PM 1 comment:

One of my favorite aspects about Elmore Leonard’s writing was that by shifting perspectives constantly he had the ability to make you sympathize with a character so that the hero of the story might not be who you thought it was at the beginning of a book.  Fans of television’s Justified who pick up Pronto for the first time will probably be confused as to why the first half of the book makes Raylan Givens look like a doofus being easily outwitted by Harry Arno.  It’s only late in the story that Raylan emerges as the real main character while Harry fades into a whining supporting role.
Leonard would even take a character that appeared sympathetic in one book and make them far less so in another.  Probably the most famous example of this was how the main characters in The Switch became the bickering lowlifes of Rum Punch. (Better known by its movie title of Jackie Brown.) 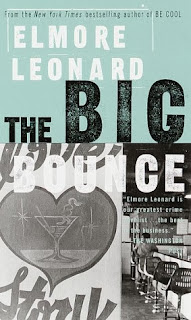 In the Leonard universe, being cool was the thing that counted most.  Whether the lead was a cop or a crook, all sins were forgiven so long as they were cool about it.  When they became uncool, they became unlikable and almost by default the villains of that story. Jack Ryan from The Big Bounce and Unknown Man #89 is unique because it seems like Leonard couldn’t decide if he was cool or not.
Ryan certainly doesn’t seem like a good guy at the beginnin of The Big Bounce where he’s in hot water after beating up a guy with a baseball bat.  Ryan loses his job picking cucumbers and is lucky not to land in jail.  He follows that up by brazenly stealing a bunch of wallets after walking into a house while the owners are partying on a nearby lakeside beach.  However, a local resort owner sees something worthwhile in Ryan and hires him as a handyman.  Jack isn’t entirely sure how he feels about this job or having someone trust him.  New temptation arrives in the form of a woman named Nancy, the mistress of a wealthy businessman who is tired of hanging out at his lake house and has been entertaining herself by shooting out random windows and running other people off the road in her car.
Nancy entices and teases Jack into engaging in some vandalism and house breaking with her, but she has a bigger goal in mind.  Her lover is going to have a large amount of cash in his house, and she wants Jack to help her steal it.
The Big Bounce was Leonard’s first contemporary crime novel, but he already had his hallmarks of sharp dialogue and a variety of offbeat characters engaging with each other while working their own angles.  What makes it interesting is how it hinges on which way Jack will turn.  Nancy seems like a kindred soul and that the two should instantly become a Bonnie & Clyde style duo.  However, seeing Nancy’s random cruelty and disregard for other people seems to awaken Ryan’s seemingly dormant empathy. 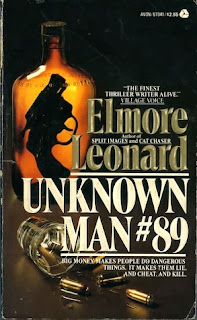 It’s a very different Jack Ryan that we meet in Unknown Man # 89.  Set years later in Detroit, Jack has gone straight and is a process server with a reputation of being able to find almost anyone.  Mr. Perez comes to town from Louisiana and hires Jack to find a man as part of a complicated stock scheme.   A criminal named Virgil Royal is also looking for the same guy to recover some money he thinks he’s owed.
When Jack meets the missing man’s drunken wife Denise, he finds himself falling for her and starts to screw up Perez’s business.  To keep things on track, Perez brings in a redneck thug while pushing Jack to help him finalize the deal.  Jack begins his own schemes to help Denise keep the money for herself even if she doesn’t want it.
Another element has been added to Jack at this point with his being an admitted alcoholic who has been on the wagon. While he certainly liked his beer in The Big Bounce, there was never a sense that Jack was a drunk so that element seems to come out of nowhere and a bit clumsily used to establish an instant connection between him and Denise as he tries to help her get sober.
There’s an odd arc to Jack through these two books with him starting as a cocky small-time petty crook whose ego has him on a permanent path of self-destruction who eventually comes to appreciate the value of someone giving him a break after meeting a truly bad woman.  Then the subdued Jack Ryan who works an offbeat but honest job finds himself embroiled with criminals and doing some pretty shady stuff in order to help out an innocent woman. Or at least that’s what he says.  It often feels like Jack is rebelling against Perez for his arrogant assumption that Jack has been bought and paid for. So there’s the return of a Jack Ryan acting in destructive ways out of pride, just in service of a nobler cause.
Re-reading the two books back to back illustrates how Leonard's characters were very often not what they appeared to be, or even who they thought they were themselves.
Posted by Kemper at 9:32 AM 4 comments: