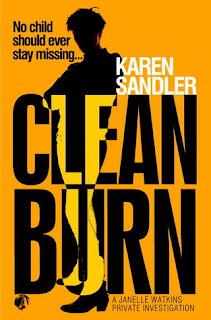 
(I received an ARC of this from NetGalley.)

Janelle Watkins sure is a HOT mess!

Get it?  Because this book is called Clean BURN and it has about fire and arson?

Oh, never mind.  I don’t know why I even bother trying to entertain you people.

Anyhow, Janelle used to be a cop in San Francisco who had a knack for finding abducted children, but a freak injury ended her career and left her with a bad leg.  She also has personal issues like being haunted by visions of a boy she failed to save and an unhealthy fascination with fire that includes a habit of burning herself with matches for funsies.

Janelle now works as a private investigator who gimps around handing cases involving cheating spouses, and she wants nothing to do with missing kids until a personal plea leads her back to her old hometown of Greenville where her former partner and lover Ken is now the sheriff.  Being in Greenville triggers a lot of unpleasant memories of her childhood as well as the awkwardness of dealing with Ken.  At first Janelle just wants to leave as soon as possible, but a series of fires and several missing kids draw her into an investigation that has her working with Ken again.

Since this is a crime novel featuring a damaged main character, it’s going to work or fail depending on how much you sympathize with Janelle.  Overall, I found her pretty compelling.  She’s messed up, but she doesn’t wallow in self-pity and generally she’s still trying to do something worthwhile even though her own life is a disaster.

However, giving Janelle the quadruple whammy of being an abused kid, having an old case that haunts her, dealing with a painful physical injury and an unhealthy obsession with fire was a little over the top.  Her level of self-loathing and insistence that something is wrong with her seemed a bit much at times considering that the worst thing she does is burn herself with matches, but self-hatred often doesn’t need a logical reason so this didn’t hurt the book much.

The rest of the story is a pretty standard thriller, but it’s competently done.  The crazy character Mama makes for a decent enough villain, and the kids in jeopardy angle adds tension to it.

The plot contained a few elements that had me nitpicking.  Despite being a small town with a near constant string of arsons and a missing kid, Ken seems to be able to just deal with all of this via a few radio calls and able to knock off work or chauffer Janelle around whenever he feels like it when it seems like a county sheriff would be living at the office and crime scenes.

There was also an odd scene where Ken takes Janelle to a dance that is being done to raise money for the funeral expenses of a kid who drowned in a river.  I’ve seen small town fund raising for tragedies that have included pancake breakfasts, auctions, bake sales and just donation cans placed around local businesses.  However, I’ve never heard of a having a dance where the people going into drink and party drop a couple of bucks on the parents of a dead kid sitting at a table by the door.  Maybe someone would do a concert of some kind to raise money, but the idea of having a full-on dance in front of the parents who just lost their son the day before seemed insane to me.

Aside from the minor gripes, this was a solid thriller with a main character I’d be interested in reading more about.
Posted by Kemper at 9:30 AM No comments: