The Cartel
by Don Winslow
Knopf

4 out of 5 hand stitched soccer balls.

There’s a scene in this book in which a Mexican drug lord essentially strolls out of prison thanks to a corrupt system.  Reality imitated art a few weeks after it released when a Mexican drug lord escaped prison via a tunnel so elaborate that it’s very hard to believe it could have been built unnoticed by prison officials. 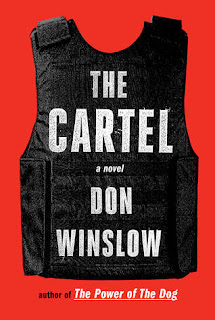 Don Winslow isn’t a prophet.* He’s just a very talented crime writer who has spent years researching the war on drugs, and he knows all too well how the same mistakes have been repeated since it started.  He gave us the fictionalized version of its shady history in Mexico from the 1970s through the end of the century in The Power of the Dog, and he returns with this sequel to tell how much worse it's gotten in the years since.
Art Keller is a DEA agent who has been at war with cartel kingpin Adan Barrera for over 3 decades.  As Keller and Barrera continue their long blood feud there’s a new power rising in the Mexican drug business.  The Zetas were founded by former soldiers who train their members to military standards, and they escalate the turf wars to an astounding level of violence in which murder is routine and decapitations, dismemberment and burning people alive all become standard operating procedure as part of their campaign to terrorize the government, the police, the ordinary citizens, and the rival cartels.
As with The Power of the Dog, Winslow isn’t just using the drug war in Mexico as a colorful backdrop to a crime story.  The drug war in Mexico is the story, and every corner of it is probed as we get a glimpse behind the curtain of the ultimate futility of it through many characters including a high school football star who becomes a high level narco dealer, a burned out journalist covering the carnage in his beloved hometown, a child whose desperate poverty compels him to become a soldier in the Zeta’s army, a former beauty queen who gets into  the drug trade to assert her independence, and a variety of others who put faces on the multiple tragedies and horrors inflicted on Mexico.
Winslow spares no one in this clear eyed assessment that looks at the problem from every angle. The US is called to account for its hypocrisy in being both the market for these drugs and the hysterical voice demanding that Mexico stop the flow of narcotics. The corruption of Mexican institutions allows the trade to flourish and the violence to escalate.  Big business is in the mix with the flow of trade and oil production in Mexico.  US and Mexican police forces have become increasingly militarized because of the drug war. Winslow is making a very ambitious case with this book that the war on drugs has fundamentally changed both countries for the worse and done incalculable damage in the process.
It’s that big picture theme and the dedication to using fiction to tell some very harsh truths where the book really shines.  Unfortunately, his commitment to that cause does hurt the novel a bit in terms of it’s characters, particularly the female ones who often seem to exist only to act as the conscience or counterweight to the male ones, but all of them are definitely in place to serve a specific plot purpose. Winslow is so good that his natural talent keeps them all interesting and  from seeming like cardboard cut-outs,but you can tell where the bulk of his energy was focused.
Another aspect that started to wear on me a bit was how repetitive the violence got after a while.  This isn’t necessarily Winslow’s failure because he is depicting reality here, and he has his characters becoming numb to the most vicious atrocities as well as commenting several times on how even the unthinkable can become routine if you see a enough of it. So I can understand why he didn’t skimp on that aspect, but it does start to grind you down as a reader after a while.
Those are minor nitpicks that I think kept me from liking this one a shade less than The Power of the Dog. Still, Winslow has written a fascinating and horrifying sequel that comes within spitting distance of living up to the first one, and it’s also a book that has some very important things to say about the true cost of the war on drugs as well as being an ambitious crime story told on an epic scale.

* Don Winslow wrote this editorial for CNN about the escape of Joaquin Guzman, and it highlights just how much knowledge he's accumulated about the drug trade in Mexico.

This review was also posted on Goodreads.
Posted by Kemper at 9:07 AM No comments: