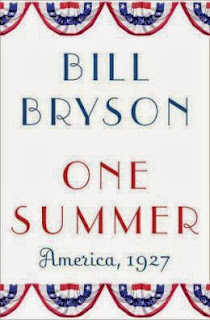 One Summer: America, 1927
by Bill Bryson

4 out of 5 Lindy Hopping stars

If you think that you had a busy summer, consider 1927:

Charles Lindbergh crossed the Atlantic and became a national hero.  Babe Ruth broke his own home run record on a Yankees team that would be remembered as one of the best baseball teams ever assembled.  The Midwest was devastated by extensive flooding and the Secretary of Commerce Hebert Hoover was in charge of recovery efforts. A routine murder trial in New York became a media sensation for reasons no one can explain.  Sacco and Vanzetti were executed and sparked outrage around the world.  Prohibition was still in effect but that didn’t stop Al Capone’s criminal empire from reaching the height of its power. Capone also attended a boxing match between Jack Dempsey and Gene Tunney that would captivate the nation and still be controversial today.  A young engineer with the awesome name of Philo T. Farnsworth made a critical breakthrough that would lead to the development of television, and another entertainment milestone occurred when the first full length motion picture with sound began filming.  After building 15 million Model Ts, Henry Ford’s company ceased production and began creating the Model A. In South Dakota, the work of carving four president’s faces into Mount Rushmore began. Last but not least, four bankers had a meeting in which they made a decision that would eventually start the Great Depression.

And yet Bryan Adams picked another summer to immortalize in song…

Bill Bryson’s book is packed with the details of these events and many more along with plenty of related stories and anecdotes.  It should read like a trivia book of 1927 factoids, but what makes it more than that is the deft way that Bryson establishes the history of what came before as well as the long term impact.  For example, he doesn’t just tell the story of Lindbergh’s historic flight and of his subsequent fame, he also lays out in a succinct manner how America had been trailing the world in aviation up until that point as well as how it changed things afterwards.

It’s that context that makes this more than just a list of events, and he also goes to some effort to add depth in several places like describing how horrifyingly racist American society was in those days with the Ku Klux Klan enjoying a reemergence while even supposedly high-brow publications like The New Yorker would casually use ethnic slurs.  By the time he tells the readers about how outlandish eugenics theories became influential which resulted in tens of thousands of people being legally sterilized in the United States, the reader can understand all too well how it could happen in that kind of environment.

In fact, one of the things that jumped out at me about this is that most of the popular figures of 1927 were basically assholes.  Charles Lindbergh's boyish good lucks and piloting skill got the press to overlook that he was about as interesting as white bread, and he’d show a nasty streak of anti-Semitism later in his life that would severely tarnish his image.  Henry Ford was also a notorious anti-Semite, and he was also the kind of ignoramus that despised people with educations or scientific background.  His refusal to consult any types of experts led him to waste millions on schemes like trying to start a rubber plantation in South America and shutting down his assembly lines to retool for the Model A with no clear plan as to what exactly they’d build.  (After reading about Ford‘s stubborn mistakes, I can’t believe the Ford Motor Company managed to survive long enough to make it to the Great Depression, let alone still be in business today.)  Herbert Hoover led a life that should have made him  one of America’s most fascinating presidents.  He was a self-made success story who had traveled the world as a mining consultant and was credited with a relief effort that fed millions in Europe during World War I.  Yet he seemed to take no pleasure in anything other than work and one long time acquaintance noted that he never heard him laugh once in 30 years.  Calvin Coolidge believed so much in limiting the role of government that he spent most of his presidency napping and would refuse to take even the most of innocuous of actions like endorsing a national week of recognition for the importance of education.

It’s funny that since the book describes so many people as either being unlikable, unethical or downright criminal that one of the few that seems decent was Babe Ruth.  While all of the Babe’s bad habits are laid out here, he also comes across as one of the few that did what he was good at with an exuberant zest for life and generous spirit that was sadly lacking in many of his contemporaries.  The guy may have enjoyed his food, liquor and women to excess, but he never hid who he was.  Plus, he was fun at parties!

Bryson’s look at the events, large and small, that made up one pivotal summer is an interesting read that provides a clear window to the past while being highly entertaining.
Posted by Kemper at 10:40 AM