Guns And Babies Are Recession-Proof

The Lost Ones
by Ace Atkins 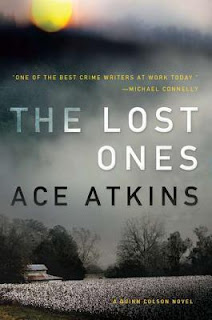 In Tibbehah County, Mississippi, a newly elected sheriff tries to track down a couple who were abusing and neglecting a pack of infants before selling them on the black market, and there’s a Mexican drug gang in the area looking to do a bulk gun deal.

And yet some people think that country life is boring.

This terrific follow-up to Ace Atkins' The Ranger finds Quinn Colson retired from the Army and trying to adjust to life as a lawman.  If he wasn’t busy enough dealing with baby sellers and illegal arms deals, his ne’er -do-well sister has breezed back into his life with a heart full of Jesus, and there’s a red-headed female ATF agent who has gotten his attention in ways that go beyond the call of duty.

If this was just a straight-ahead action thriller, that’s a pretty good set-up right there.  But what moves this up a notch and gets it an Edgar Award nomination for best novel is the way that Atkins has created a believable cast of characters in a small town setting and uses the connections between them and Quinn to give the story some depth.

Quinn’s relationship with his sister Caddy, including a dark secret the two share, adds some history.  Childhood buddy and gun dealer Donnie Avery is a fellow veteran who wants to live life to the fullest after getting blown up overseas, and he‘s willing to do a huge arms deal to impress a beautiful Mexican woman.  Donnie reminds Quinn of his hell-raising past and what he could have become.

Then there’s a fight with the corrupt local politician Johnny Stagg to save the county some money and maybe help out another old friend and veteran in the process. The high school sweetheart who once broke his heart is married to someone else and pregnant, but there’s some unfinished business between the two that Quinn doesn’t fully understand.  His mother has been raising his nephew during his sister’s frequent absences, and Quinn tries to be a father figure and limit the damage done to the kid  by Caddy’s infrequent appearances.  His chief deputy is one tough lady, and their relationship is another one that could get extremely complicated if Quinn isn’t careful.

It’s the details of a crowded life of a guy who returned to the small town he meant to leave forever and has begun to enjoy the things he once tried to escape that set this apart from others in the genre.  Add in some wild criminal plots and an ex-Ranger sheriff who is still getting used to the idea of driving up to a trailer and serving a search warrant rather than sniping everyone there from the trees, and you get one great rural crime novel.

Also posted at Goodreads.
Posted by Kemper at 3:36 PM