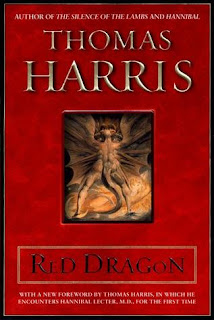 When it comes to Hannibal Lecter, I’m like one of those music hipster douche bags that everyone hates because I’ll snootily declare that I  knew about him long before most people did and that he’s sucked ever since he got really famous.

I’d read this years before the book of The Silence of the Lambs came out and led to the excellent film adaptation that skyrocketed Hannibal to the top of pop culture villains. Hell, I’m so Hannibal-hip that I’d caught Brian Cox playing him in Michael Mann’s adaptation Manhunter, and I didn’t just see it on VHS like all the other late-comers, I actually saw it in the theater.  Twice!  (I’m pretty sure this is the literary equivalent of claiming to have seen a band in a bar with eleven other people long before their first record deal.)

So after Thomas Harris and Hollywood ran the character into the ground after the second movie, it’s been years of shaking my head and saying, “Man, nothing’s been the same since Anthony Hopkins gave his Oscar acceptance speech.”

Since I felt like Harris was just cashing in and had pretty much ruined Hannibal in the process, I hadn’t felt the urge to revisit Red Dragon or The Silence of the Lambs in some time.  I was more than skeptical about the NBC prequel TV series Hannibal, but great reviews and the involvement of Bryan Fuller got me to check it out.  Not only has it been  incredibly good and returned Hannibal Lecter to his creepy best, it’s clever use of events referenced as back-story in Red Dragon had me digging out my copy to refresh my memory.  Even better, the show has given me a new appreciation for an old favorite and reminded me what I found compelling about it to begin with.

Will Graham was a profiler for the FBI until he was badly injured while identifying a certain gourmet serial killer whose name conveniently rhymes with ‘cannibal’ which certainly made life easier for the people writing tabloid headlines.  Will has retired to a happy new life with a wife and stepson in Florida until his old boss Jack Crawford comes calling and asks for help.  There’s a brutal new killer dubbed the Tooth Fairy by the cops due to his habit of biting his victims.  He’s killed two families after breaking into their homes and seems to be on schedule to do it again at the next full moon.

Will is reluctant to come back not just because he’s already been gutted once by a madman, but he also fears that trying to think like a mass murderer isn’t the best thing for his mental health.  It turns out that his concerns are justified after a tabloid journalist essentially paints a target on his back for the Tooth Fairy.  Even worse, Will has to confront the man who nearly killed him and being confined to a cell doesn’t mean that Dr. Lecter can’t still do some serious damage.

Even as someone who was on the Hannibal bandwagon for a quarter of a century, it’s shocking to re-read this and realize how small of a part he actually plays in the story.  Yes, he’s terrifying and his presence hangs over Will like a dark cloud, but he’s still a supporting player.  Francis Dolarhyde (a/k/a The Red Dragon a/k/a The Tooth Fairy) may not have Hannibal’s culinary skills, he’s one damn scary and slightly tragic villain, and Will Graham makes for a damaged but compelling hero in the story.

I think one of the things I love best is just how much time is spent on how Will thinks.  As a man with extremely high levels of empathy and a vivid imagination, Will’s ability to put himself in someone else’s shoes is a gift and a curse.  Thinking like deranged killers has left him questioning if he might not be one of them, and it spills over all his emotions like a toxic oil spill.

By understanding their madness, Will can find the logic in their thinking, and it’s following that internal logic that allows Will to find the evidence they need. The breakthrough Will eventually makes is one of my all-time favorite examples of pure detection in the genre.  It was in front of the reader the entire time, but it’s such an elegant solution that fits together so perfectly that Harris doesn’t have to engage in obscuring it with red herrings.

As a thriller that led to countless imitators and even the eventual collapse of the franchise due to it’s own success, it’s been often imitated but rarely equaled.

Check out my review of the new Hannibal TV series at Shelf Inflicted.
Posted by Kemper at 7:15 PM