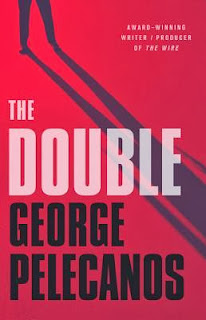 The Double
by George Pelecanos

My friend Dan has a theory that Spero Lucas is the illegitimate son of Travis McGee, and considering  the similarities between the two, this seems like a reasonable scenario.

Both are ex-military guys who eschew the traditional American lifestyle of steady jobs and families so that they can live on their own terms.  Not only are their attitudes alike, they also have found similar ways to turn a buck by recovering stolen items for a percentage of their value in incidents where the owners can’t use the legal system for one reason or another.  They are capable, sometimes violent, men who make their way with their wits and their brawn while feeling like outsiders from the people living ordinary lives around them.

The big difference is that John D. MacDonald’s creation was a pulp male fantasy in which McGee lived on a houseboat while cruising the Florida coast and picking up scores of beach bunnies with an attitude that would probably get him routinely pepper sprayed today.  Spero likes the ladies and can attract his share, but he’s far less of a man-ho than his spiritual predecessor.

The first book, The Cut, established Spero as a former Marine who saw extensive combat in Iraq.  Back in his home city of Washington D.C., Spero’s time facing death has left him impatient to get on with his life.  He wants meaningful work on his own terms and to enjoy simple pleasures like good music or the company of a pretty woman.  Working as a private investigator for a lawyer provides some steady income, but Spero also takes side gigs.

This time out Spero is helping a woman who barely avoided an Internet scam, but apparently the near-miss put her in the crosshairs of a predatory sexual con man who arranged the theft of a valuable painting she owned called The Double.  As he tries to track down the trio responsible for their own crime wave of scams and robbery,  Spero is also working for the lawyer to find evidence that could clear a man accused of murder as well as poke around the death of a young girl who was a student of his brother.  He also gets involved in a torrid affair with beautiful married women, but while Spero has tried to keep his romantic encounters casual, he begins to crave more than just sex with her.

As always with a George Pelecanos novel, there’s the incorporation of various locales that make his literary DC come alive.  Whether Spero is biking through up-scale neighborhoods or stopping by an auto shop to questions a suspect, Pelecanos has a knack for casually imparting the bits of detail and history that make the city one of the characters in the novel.

Spero seemed like he had a lot of potential as a character in the first novel, and Pelecanos adds the kind of depth to make him really special here.  On the surface, Spero seems to have his act together and knows exactly what he wants, but there are new layers of uneasiness added here.  His relationship with the married lady makes him start to question the bachelor lifestyle he thought he wanted.  This feeds into more inner conflict about the life he’s living.  Spero’s thoughts increasingly turn to his late father, the man who adopted him and his brother and gave them a loving home by his honest hard work and devotion to his family, and Spero is starting to find himself lacking in comparison.

Worst of all is that it starts to seem like the war may have taken a bigger toll on his psyche than he previously thought.  Spero learned how to kill overseas, and he was good at it.  That skill is a valuable tool in his work, but as the saying goes, when you have a hammer, every problem starts to look like a nail.

Pelecanos has written a lot of great crime novels with memorable characters, but Spero may be his best one yet.
Posted by Kemper at 9:59 AM