The third book of Duane Swierczynski's Charlie Hardie trilogy was recently released.  Here's the three reviews I wrote as each one came out. 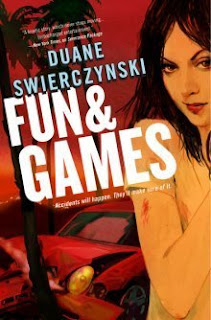 One reason I never bought into any of the conspiracy theories that swirl around celebrity deaths like Princess Di or Marilyn Monroe is that they always seem to be based on the notion that there are these shadowy figures that can orchestrate murder on demand and cover it up without leaving a trace. Hell, when Nixon wanted the Watergate black bagged, he had to use incompetent bastards like G. Gordon Liddy and a ragtag group of Cuban exiles, and he was president of the United States. If there really was a network of efficient criminals to do some dirty deeds, you’d think Nixon would have had them on speed dial.

However, while I don’t believe in the idea of vast conspiracies with armies of hired killers, that doesn’t mean I don’t enjoy stories about them. Duane Swierczynski  has come up with a highly entertaining spin on the whole conspiracy theory thriller genre.
Charlie Hardie used to work for the cops but these days he’s a professional house sitter. The job lets him indulge in his hobby, binge drinking. When Charlie shows up for a gig in LA, he doesn’t even get his bottle of bourbon open when he’s attacked by a woman hiding in the house. Even more shocking is that she is Lane Madden, a B list actress who frantically claims that people are trying to kill her. Charlie thinks he’s just dealing with another drugged out celebrity until some very bizarre and dangerous shit starts to happen very quickly. It turns out that Charlie has interrupted the Accident People as they were in the midst of their latest project, killing Lane Madden.
The Accident People are a group that specialize in killing high profile targets and providing an air tight cover story so that no questions will be asked. In Lane’s case, their plan to off her via a car accident went off the rails when Lane managed to escape and hide.
Swierczynski  put a unique twist on the shadowy conspiracy operatives in this with the Accident People. They are made up of a lot of former film people with a ’director’ coming up with the narrative about how they want the death to play out, and then using actors and technical people to make it happen. They've also got access to a variety of lethal weapons like poison gas and drugs that induce heart attacks. It’s a little over the top (What conspiracy thriller isn’t?) but it at least puts a thin layer of plausibility and explanation as to just where the hell one would an obtain a covert network of people able to get away with murder.
Fast, dark and fun, this was some high octane reading. Duane S. springs some big surprises in this, and it keeps you guessing throughout. This is the first part of a trilogy so there’s a bit of a cliffhanger at the end. If you’re in the mood for a crime thriller that reads like a good action movie, this fits the bill. 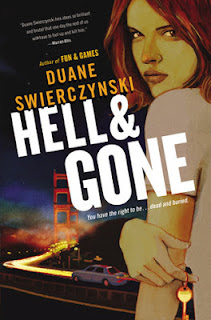 Duane Swierczynski has ideas so brilliant and brutal that one day the rest of us will have to tool up and kill him. - Warren Ellis
Swierczynski seems to be making the transition from cult favorite to getting more main stream attention, so Ellis will probably try to make good on this threat in the near future. Since I’m enjoying the hell out of his work, I am volunteering my services as a bodyguard. What I lack in training, experience and competence, I make up for in my utter willingness to pepper spray absolutely anyone (including small children and the elderly) who’d give Mr. Swierczynski any grief.
Hell and Gone is the second part of a trilogy. In the first book, Fun & Games,  ex-cop Charlie Hardie is a house sitting drunk who has a very bad encounter with the Accident People. The AP’s are a branch of a Vast Conspiracy that does a variety of nefarious things, and their specialty is the elimination of high profile targets like politicians or celebrities via untraceable ‘accidents’. Charlie threw a monkey wrench into one of their operations in L.A. but didn’t manage to escape so he figured he’d be dead in about 12 seconds.
But instead of killing him, Charlie is given a weird job offer. The Vast Conspiracy decides to make him the warden of a secret prison instead. With no other options, Charlie plays along hoping to find a way to escape. Unfortunately, the prison is a decaying underground complex at an unknown location that would make a pretty good setting for a video game. The handful of inmates are extremely dangerous and require a Hannibal Lector level of security, and the guards are only slightly more trustworthy than the prisoners. And the special sauce on this shit sandwich is that if any one tries to get out through the original entrance, it’d trigger a ‘death mechanism’ that kills everyone in the prison.
Fun and Games was a fast-n-furious action novel with heaping helpings of ultra-violence and humor. Hell and Gone is less actiony and more of a mind fuck, but it’s still powered by it’s breakneck pace and the sheer awesome insanity of its plot. This is the literary equivalent of taping a bunch of bottle rockets together, lighting the fuses and then tossing them into the middle of your 4th of July barbecue. It’s chaos, but it’s entertaining as hell. And if Swierczynski did what I think he did at the end of this one, the final book is going to be even crazier.
Also, Swierczynski is one of the authors I got to meet at Bouchercon earlier this year, and he seemed like a very nice guy who patiently answered my questions about superheroes. I may even brave the latest DC continuity reboot and pick up his Birds of Prey comics which I’ve heard good things about. 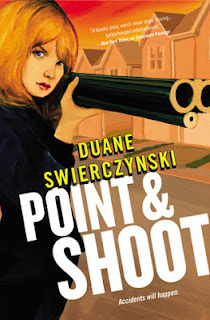 With his Charlie Hardie trilogy, Duane Swierczynski has successfully created a perpetual momentum machine that feeds off it’s own outrageous plot twists and increasingly crazy action to the point where it becomes self-sustaining in defiance of every rule of physics and literature that dictate it should have long ago exploded in the faces of its readers,  killing or maiming them all.

It’s impossible to recap this without spoilers, and spoilers should be avoid at all costs.  So suffice it to say that it’s about a guy named Charlie Hardie who once did some work for the Philadelphia police department before tragedy had him change careers to being a drunken house sitter.  Then fate had him cross paths with a vast conspiracy known as the Accident People.  This is the group behind almost every shady death of a celebrity or politician.

Charlie fouled up one of the AP’s plots and his life has been a hellish nightmare of being used in their increasingly elaborate schemes with interludes of occasionally breaking free to try and stop then and invariably trigging more of their wrath.  Here at the end of the road, Charlie is confronted with yet another mind blowing twist as well as an insane escape situation and then a desperate road trip to try and protect his wife and son.