Murder In The Sun 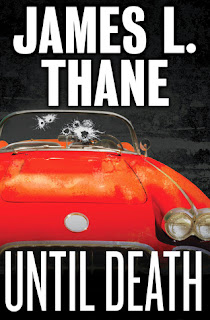 Until Death
by James L. Thane

I’m not going to pretend that this is in any way an objective review…..

Jim Thane has been a longtime Goodreads friend, and I’ve often pointed to him as the example of how we all wish authors would behave on there.  Instead of pimping out his own books, he actually writes great reviews and interacts with others regularly  They don’t call him Gentleman Jim for nothing, folks…

In fact, Jim is sometimes too polite for his own good because he’s barely drawn any attention to the release of this second book featuring Phoenix homicide detective Sean Richardson. As Sean and his partner Maggie are working on one case of brutal murder, a high-end prostitute named Gina comes forward with the information that someone has stolen her little black book containing all her clients and that someone has been murdering these men. As Sean scrambles to uncover the killer, he’s also still grieving for his recently deceased wife, and he finds himself increasingly intrigued by the beautiful Gina.

Like the first in the series, this is a police procedural, and there are enough valid suspects in play to keep a reader guessing until the killer is finally revealed.  There’s also a very cool plot point based on technological twist that threw me for enough of a loop that I had to check with Jim to verify that it was a real thing and not something he invented for the story.

Sean makes for a sympathetic lead character with his grief providing a nice counterpoint to his no-nonsense police persona.  He’s like a more polite Lucas Davenport or a more human version of Sergeant Joe Friday from Dragnet.   It’s also a refreshing change of pace to read crime novels not set in New York, LA or Florida.


The fine folks at Shelf Inflicted did an interview with Jim Thane that includes one of the funniest and most epic answers ever to a question asked of a crime novelist.

Also posted at Goodreads and at Leafmarks.
Posted by Kemper at 11:03 AM